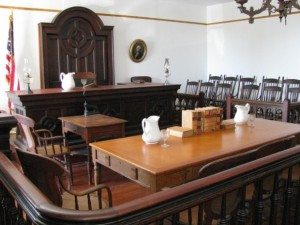 First Court Date for a Criminal Charge in Ohio

Your first court date for a criminal charge in Ohio is an important.  It is generally referred to as an initial appearance or an arraignment.  At your arraignment you are expected to enter an initial plea.  There are three basic pleas in the Ohio courts:  Not Guilty, Guilty, or No Contest.

If you enter a Not Guilty plea, the case will be rescheduled by the Court and you express an intention to contest the charges.  It may be set for trial immediately.  It’s important to note that a Not Guilty initial plea will never be used against you.  You are completely within your rights to talk to an attorney and contest the charges.  There may come a time when your plea is later changed, but there should never be a time when a Not Guilty initial plea causes you to suffer additional punishments.  It’s always best to speak to attorney first, however.

A Guilty plea, means that you are stating officially that you are admitting guilt for the crime or traffic violation for which you have been charged.  The court would then be free to sentence you as allowed by statute.  When you enter a Guilty plea, you are giving up important constitutional rights, including your right to trial to the judge and/or trial to a jury.  Some people make the mistake of pleading guilty because they believe they are guilty and that taking immediate responsibility for their actions is the best course.  Remember, though, it may be entirely possible to take responsibility and also be protected and advised by counsel while doing so.  Once you enter a guilty plea it can be very difficult, often impossible, to take it back.  Criminal convictions can result in a lifetime of consequences and it’s important that your actions with dealing with a court are informed.  For example, you may not know what defenses are available to a particular charge even when you believe you are somewhat knowledgeable about the court process.  Speak to an experienced attorney who regularly deals with criminal cases first!

A No Contest plea is one of the most misunderstood concepts in the field of criminal law. Although not an admission of guilt, a No Contest Plea is an admission of all of the facts contained in the charging instrument (citation, complaint, indictment, or bill), or an admission to facts stated on the record in open court.  After a No Contest plea, a judge or magistrate is required to review those facts and determine if they amount to the violation of law as alleged.  A no contest plea does not create a situation where you are able to explain your side of the situation in an attempt to have the judge find you not guilty.  In my experience, a No Contest plea results in a finding of guilty by the court in more than 99% of cases.  Always speak to a criminal defense attorney before entering a No Contest plea.